The History of LISP web site launched back in 2005 as a single web page running some 40 pages when printed; it covered many of the best known Lisp implementations. Over the years, the web site approximately doubled in size, leading several people to politely suggest breaking it up into smaller units. I’ve finally taken the time to do that. The organization roughly follows that used by Steele and Gabriel in their 1992 HOPL II talk, and I’m still making minor adjustments. It would be nice if a web site dedicated to historical archives would have stable URLs, but I think the new organization will be appreciated by people mostly interested in one or two specific implementations. I have not changed the URL of any “content” (PDF or archive file).

Thanks again to the many people down through the years who have patiently answered my questions, supplied copies of source code and documents, and allowed me to post copies.

Elements of Programming is now available in a Japanese edition published by Pearson Kirihara and translated by Yoshiki Shibata. It is available via Amazon.jp. 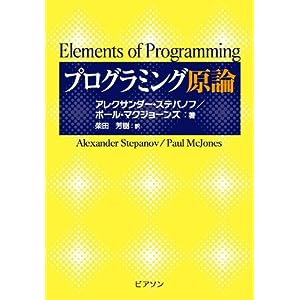