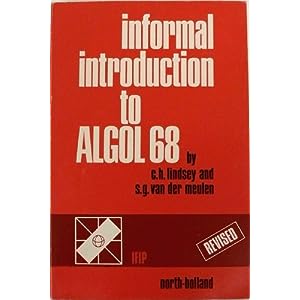 Several years ago I began an archival collection for the Algol family of programming languages: Algol 58 (originally known as the International Algorithmic Language), Algol 60, and Algol 68. I began looking for implementations of Algol 58 and Algol 60. Since then I’ve also found information (including, in some cases, source code), for many Algol 68 implementations.

I’d like to announce the return of a very useful Algol 68 resource: a scanned copy of Informal Introduction to Algol 68, posted by permission of coauthor Charles H. Lindsey and copyright holder IFIP. This is the revised 1980 reprint of the second (“completely revised”) edition of 1977. For convenience, I’ve also posted separate files containing the large fold-out Table of Contents and the appendix of Syntax Charts.

This book, together with Marcel van der Veer’s modern Algol 68 Genie implementation and the extensive documentation accompanying it (including a hypertext version of the Revised Report) provide an excellent way to study Algol 68.

In addition to the above-mentioned, a number of other people have contributed to the overall Algol archive project. I’d like to single out Neville Dempsey for his dedication to spreading knowledge of and appreciation for Algol 68.